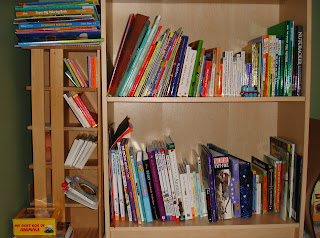 This is Z's area on our bookshelves. These aren't all of his books. There are some upstairs in the bedroom and others scattered around the house. By the way, Z is the first letter of his nickname. We aren't so creative as to have named our son with a fantastic "Z" name. We were fortunate, however, in coming up with a snazzy "Z"-based nickname!

Z's shelves are a blend of old and new classics and a bunch of random books that he picked for himself that don't have a lot of literary value but sure have some pretty pictures (like the plethora of Baby Einstein titles). Some of the classics that I have seeded the shelves with are:
Where the Wild Things Are by Maurice Sendak
Corduroy by Don Freeman
Mike Mulligan and His Steam Shovel by Virginia Lee Burton
Caps For Sale by Esphyr Slobodkina (oh, those cheeky monkeys!)
The Little Prince by Antoine de Saint-Exupery
Harry the Dirty Dog by Gene Zion
Just So Stories by Rudyard Kipling
Harold and the Purple Crayon by Crockett Johnson
The Wind in the Willows by Kenneth Grahame
Tikki Tikki Tembo by Arlene Mosel

Obviously he's not picking up The Wind in the Willows to read yet but that's one of the ones that I found it on my mom's bookshelves when I was ready and I loved it. I can only hope it will be the same for him. 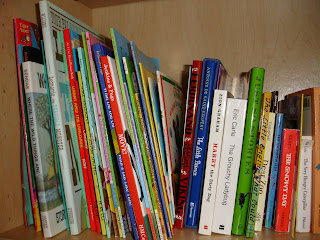 He has quite a few of the Charlie and Lola books by Lauren Child. He watches the cartoon versions of the stories but he actually chose the books first and then was pleasantly surprised to find the cartoons. He has a few Disney tales and storybook collections, especially because he has a fabulous auntie that is a Disney employee so she likes to gift Disney. He of course has some Curious George books as well. What would childhood be without George? 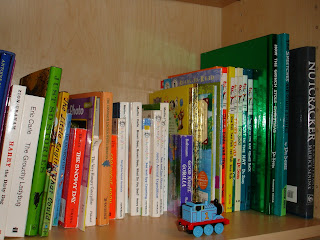 A few years back we picked up Mo Willems' fantastic Leonardo, the Terrible Monster. We don't have any of the pigeon series yet though. I think they have some language (more specifically, sass) in them that I wanted to hold off on having Z imitate! We can't deny that we have plenty of Eric Carle and Dr. Seuss. And Z has a handful of Animal encyclopedias which he actually takes the time to sit and read. They aren't all his -- my degree is in zoology so I had my own collection before he came along -- but he has appropriated any books of mine that he was interested in.

I love having a large selection of books available for Z. He picks different ones up every day and sometimes gets very excited about what he has found. I think it's absolutely essential for parents to have children's books around the house and we make it a point to gift books to our nieces. I hope that one day Z will be preparing for his new baby and one of the preparations will be the start of a children's bookshelf.