I previously sang the general praises of Agatha Christie but since I am going to do some reviews, I wanted to give you a little more insight into her characters so that, if you are new to Agatha, you can follow or decide which stories really interest you. 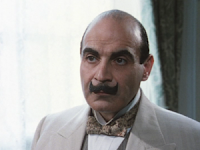 First, there are two main series. Hercule Poirot is a retired Belgian policeman turned detective who exercises his "little grey cells" in solving mysteries that he is hired to investigate. The picture in most people's minds of Poirot is the portrayal by David Suchet in the BBC's Poirot series. He is a fastidious man who is obsessed with his "moustaches". According to Wikipedia, Poirot is in 33 novels and 51 short stories. He is an iconic detective who always gets his man but doesn't always turn him in -- sometimes he lets the criminal take an easier way out.

Christie's other main series is the Miss Marple series. Marple is featured in a dozen novels and a handful of short stories. There is also a Marple television series on BBC. Jane Marple is a spinster who has a knack for ending up "in the neighborhood" when a murder has occurred. Her only qualification for solving these murders is her experience in life. She has an ability to recognize certain personality types in people (based on people she knows from her small hamlet of St. Mary Mead) and to use that information to deduce motives and actions. She is a cunning but soft-spoken woman who helps the police with her unique talents though she is hardly ever called upon officially to do so.

The final pair that star in their own series of novels are Tommy and Tuppence. There are five stories starring this pair. They are young twenty-somethings at the start of the series, much younger than Poirot and Marple, but the series ends when they are in their seventies apparently. I've only read the first two books in this series so far. These two have connections to the British government but in an unofficial capacity for the most part, although they do profit handsomely from it.

The final two recurring characters are Mr. Quin and Mr. Parker Pyne. Parker Pyne is a "problem solver", not just dealing in thefts and murders. The stories about him are amusing but don't really let you follow in the problem solving. Mr. Harley Quin is a supernatural sort of man who seems to be omniscient and he leads others to the right questions in order to find solutions.

Of course, Agatha Christie also has many, many stories that don't feature any of these sleuths. With 80 novels and 160 short stories, not to mention her numerous plays, it is surprising that she manages to keep such high quality through most of her stories. There are a few that are less detective and more supernatural that just seem a bit weak but these are definitely a small minority of her writings.

Still enjoying the mystery,
K
Posted by Kristen M. at 12:14 AM