"Mrs. Thomas Beresford shifted her position on the divan and looked gloomily out of the window of the flat." 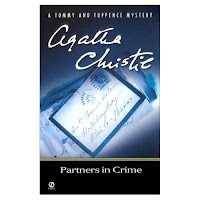 Now that you are familiar with Agatha Christie's detectives, I'll tell you about the book I just finished, Partners in Crime. This is the second book in the Tommy and Tuppence series. In the first book, The Secret Adversary, they were in their early twenties and rather immature. This book takes place six years later. They are older and living more of a staid existence -- which is boring Tuppence to tears. Luckily for her, they are offered an exciting challenge -- to run a detective agency that is being used as a midpoint for foreign spy communications. This book has an overstory but is essentially a collection of short stories with each case they take on. One thing I liked was that they incorporated the techniques of the detective stories that they had read in their time, including Poirot in one story. This wasn't an obnoxious change of pace in each story but really more of a name dropping and a subtle subtext. I really enjoyed the format of this book as I think Christie is fantastic with the short mysteries. I'm sad that this is such a short series, only three more stories with Tommy and Tuppence.

Reveling in the mystery,
K