Early Readers of the Week

The early readers that we picked up from the library last week have something in common. They are both by fantastic all-in-one writer/illustrators. 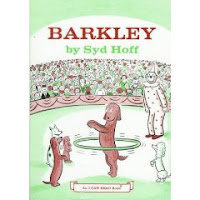 First we have Barkley by Syd Hoff. This is the story of a circus dog that starts to get too old to do all of the tricks with the other dogs. He leaves the circus to see if he can fit in somewhere else and he thinks he has found the place in a yard full of kids. But the kids have other ideas when they see him perform some tricks and they decide that he still belongs at the circus. When he gets back, he finds that even if he is too old to peform, he's not too old to be useful. He can teach the young puppies all of the tricks he knows. The thing about some of these older books (this one was written in 1975) is that they tend to be stronger and perhaps more esoteric in their moral message. This one is that your knowledge will always be useful to someone else. Maybe this book is supposed to inspire the thought in children that they should make use of the knowledge of their elders. I don't think Z got that at 4 years old. He just likes dogs and the circus.

Then we got Richard Scarry's Watch Your Step, Mr. Rabbit! This one is much more straight-forward. Mr. Rabbit is reading his paper while walking down the street and he steps into wet cement and gets stuck. All of the other animals work together to get him unstuck and yet he still goes off on his way with his nose back in the newspaper. This story strangely ends with Mr. Rabbit nearing the edge of a pier while wearing the residue of his previous mishap -- cement shoes. Not such an uplifting moral in this one -- more of a mob moral. Strange. Z really liked the basic text in this one though. It's a very easy reader with a good rhythm.

Fans of the pictures and the words,
K and Z

and Watch Your Step, Mr. Rabbit!

on Amazon or find them at your local bookstore.
Posted by Kristen M. at 12:05 AM