"Whether I shall turn out to be the hero of my own life, or whether that station will be held by anybody else, these pages must show." 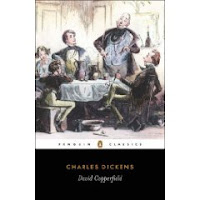 I didn't set out for my first two books in this favorites list to both be by Charles Dickens but I happened to watch a David Copperfield Masterpiece Theatre this past weekend and it has put me in the mood to discuss this book. This was written when Dickens was in his 30s and is thought to be his most autobiographical. This book contains one of the most lovable Dickens characters in Mr. Micawber and arguably (not really - it's a given) the most repulsive one -- Uriah Heep. It is hard to write a summary of a Dickens book because he writes about dozens of characters so I will give you the briefest one possible.

David is a boy who, as he says, is born "a posthumous child" -- after the death of his father. He lives a happy childhood with his mother and their servant Peggotty. When he is still young, his mother remarries a Mr. Murdstone who turns out to be the prototypical evil stepfather. David is sent away to school for a brief time and while he is there, his mother dies. Murdstone recalls him home and tells him that he is now on his own and sends him to London to work in a factory. Eventually he runs away from this horrible life to try his luck with his aunt, Miss Betsey Trotwood. She decides to take guardianship of him and this time he goes to Canterbury to study and become a gentleman and a man of business. Many sad and unfortunate things happen to him and those he loves but he constantly moves forward. Through all of this and through the following years, he retains his innocence and good nature even while coming into contact with treacherous and vile people. On the other hand, he is also rewarded with true friends and true love.

That seems like a very poor summary of the book because much of the value of it is in the well-written and diverse characters: Peggotty and her father Mr. Peggotty, Em'ly and Ham (Peggotty's cousins), Steerforth (David's school friend), Betsey Trotwood and her simple-minded friend Mr. Dick, the Micawber family that David lives with while he works in the factory in London, Mr. Wickfield and his daughter Agnes who David lives with when his aunt sends him to study, and finally the repulsive Uriah Heep. Each of these characters has something to add to the story which is why David, in starting the book, uses the words that he does -- that he may or may not be the hero of his own story.

This book is often overlooked because of the simple title and the prejudice against Dickens but it is really a fantastic story. If you aren't sure about it, I suggest that you watch the fantastic miniseries. It has Daniel Radcliffe (Harry Potter) as the young David Copperfield and other stars of British cinema including Bob Hoskins, Maggie Smith and Ian McKellen.

Worshipping at the altar of Dickens,
K

on Amazon or find it at your local library.
Posted by Kristen M. at 12:33 AM