"Faint streaks of crimson glimmer here and there amidst the rich darkness of the Kentish woods." 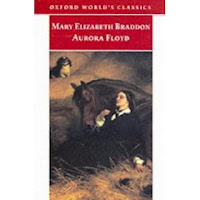 The first book I decided to read for the 2nds Challenge was Aurora Floyd by Mary Elizabeth Braddon. The first book I read by her was Lady Audley's Secret, which I loved. It had an incredibly shocking twist and was a very dark story. This one had a much lighter tone but could have been called Aurora Floyd's Secret because it was the same sort of plot -- a wife's character is compromised by a secret in her past. But while Lady Audley's secret exposed her extremely negative character, Aurora Floyd's secret eventually gains her sympathy from her family and from the reader.

Mary Elizabeth Braddon was a Victorian novelist who was grouped with authors like Wilkie Collins as a "sensationalist". I really enjoy this genre and this book was a good example of it. Apparently Braddon wrote eighty-five books (!) so even though this is only her second book that I've read, I still have much more to explore.