"The first thing I noticed was the ivy, not the sun-bleached tombstones with their off-white color ..." 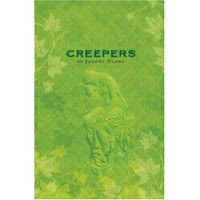 It was very odd when I picked up Joanne Dahme's Creepers and saw the handdrawn map inside the cover and the cemetery called Memento Mori. Since I had just finished Muriel Spark's Memento Mori, this seemed like a sign that this would indeed be the next book I read.

Creepers is about a teenage girl who moves to a small town in Massachusetts and into an old house which is of course covered in ivy. The house is situated next door to the town's cemetery which has the words Memento Mori, "remember death", over the entrance. At the cemetery, Courtney meets a historian, Mr. Geyer, and his daughter Margaret. The Geyers enlist Courtney to help them solve the mystery surrounding another father and daughter, Christian and Prudence Geyer -- eighteenth century residents of the same house by the cemetery. This is the perfect ghost story with tombstones, a witch and some quick-growing, purposeful ivy.

This was Dahme's first novel and unfortunately it showed a bit. There was nothing wrong with the plot of the story and I definitely enjoyed it. However, it seems that the book needed some more input from an editor. The story was supposed to be told from the perspective of a young teen girl but her vocabulary level rose and fell mysteriously. There was a strange overuse of italics and proper names and a lack of contractions. It just wasn't believable as the voice of a 13 year old. One cool thing is that the book has a stationery-like feel with ivy-printed pages and a variety of fonts for different voices.

Pulling up the ivy,
K

Email ThisBlogThis!Share to TwitterShare to FacebookShare to Pinterest
Labels: mystery, YA fiction