"My name is Mary Katherine Blackwood." 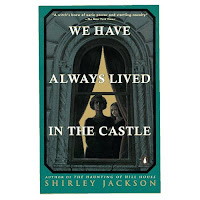 We have Always Lived in the Castle is a strange title for a book that only mentions a castle once. I thought it would be the name of the house or something like that. But besides the less than meaningful title, this was an engaging and incredibly sad book. Prior to this, I had only read one other story by Shirley Jackson -- The Lottery. This book didn't have any shocking turns like that other book but it most certainly was shocking.

The family members that live in the house are eighteen year old Mary Katherine, Merrikat for short, her older sister Constance and their father's brother Julian. They are all that remains of a family that fell victim to arsenic in the sugar bowl one night at dinner. Constance was tried but acquitted for the crime. Now they live together, each with their own eccentricities and flaws. One day, a cousin Charles appears and threatens the precarious balance they have in their lives.

There was such a palpable feeling of sadness during the entire book. I don't think I have ever read something quite like this. Jackson is certainly very good at making one feel while reading. It's somewhat disconcerting. I think this is the sort of book that you read once but are affected by for the rest of your life.


Buy We Have Always Lived in the Castle