We haven't had much luck lately finding library books to replace the joy that Z gets from Wolf's Coming! -- which we still have -- but I think I may have found a pair by Tomi Ungerer that have a chance.

The first book is from 1958, Crictor, the story of a boa constrictor sent as a gift to an old woman in France from her son in Africa. The snake is not only friendly but helpful and smart. He wears a sweater in the winter. He attends the school where the woman teaches and learns his alphabet and numbers. He helps kids get kites down that have gotten stuck. Finally, he foils a burglar and gets a statue put up in the town and a park named after him by the grateful mayor. A boa constrictor should be a scary thing but this story makes the snake as cute as a kitten. 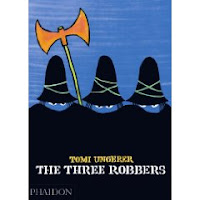 The second book, from 1962, has an even more menacing subject, The Three Robbers. We meet the three robbers and see their weapons and how they use them to rob carriages. But one night they stop a carriage that only has an orphan in it and so they take her off to their lair. She sees all their treasure and asks them why they hoard it and they aren't quite sure. So they set to spending their money in a perfectly fantastic manner -- by helping "lost, unhappy and abandoned children". They buy a castle which becomes a village and the children always remember their benefactors kindly. This is a story about redemption and how children can change the world. These are both really great books.

Loving the sweetness of it all,
K and Z

and The Three Robbers

on Amazon or find them at your local library.
Posted by Kristen M. at 12:06 AM