A Pair of Fantastic Marriages

If you don't recognize the name Hayao Miyazaki, you are missing out on something special. Miyazaki is a Japanese director of animated films. He has a unique vision and a sensitive but empowering way of portraying children. His most well-known film is Spirited Away, released in the U.S. a few years ago. Now almost all of his films have been dubbed in English and released here. 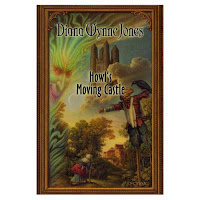 A while back, I noticed in the credits that one of his films, Howl's Moving Castle, was based on a book by Dianna Wynne Jones. This was the first book that I read by her and she is now one of my favorite YA authors. Miyazaki's Howl movie is actually only loosely based on the book but both are completely enjoyable. Sophie is a shy hatter's daughter who is put under a spell that makes her into an old woman. She leaves home and ends up taking up residence in the castle of the wizard Howl -- a castle that moves around the countryside and has multiple magical entrances in multiple towns. Sophie becomes Howl's housekeeper as she looks for a way to reverse her curse and also to build her confidence as a woman. That simple story is the basis of both the book and movie but the details past that diverge in two fantastic directions. Z loves this movie and I'm sure he will read the book when he is older. 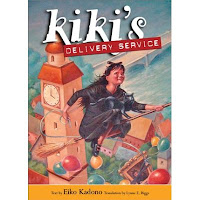 This past week at the library I picked up another book that Miyazaki made into a movie, Kiki's Delivery Service by Eiko Kadono. This one was different in that it was truer to the book and though it had some different plot lines, they seemed more like they were just other things that would have happened to Kiki and not really a change of the main plot. When Kiki turns twelve, she leaves home to pursue her career as a witch. Her only witch talent is for flying so she decides to start a delivery service. She makes friends and learns how to be successful and enjoy life. Both the book and the movie are simple and sweet, as any story about a twelve year old should be.

I think these are the only Miyazaki films based on books so I will have to find an excuse to sing the praises of his other films later!

(the book) and Kiki's Delivery Service

(the movie) on Amazon or find them at your local library or video store.
Posted by Kristen M. at 12:30 AM

Email ThisBlogThis!Share to TwitterShare to FacebookShare to Pinterest
Labels: fantasy, film, YA fiction