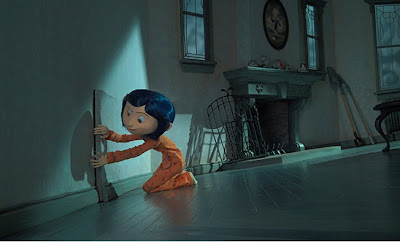 Z and I decided to do a weekday afternoon showing of Coraline this past week. I opted for a 2D showing after the fun that was the Monsters versus Aliens 3D commercial during the Superbowl. We tried the 3D glasses thing and I got "Mom, can you help me?" every minute or two when he knocked the glasses off. I know that the glasses at the theater would be better made than the paper ones but I just didn't want to deal with that.

A few of you were curious if this movie would be appropriate for younger viewers and the verdict is this -- if your kid does okay with most animated suspense, they should be fine with this movie. Scenes in Coraline are sometimes creepy and regularly suspenseful but only briefly scary. If your kids get scared during Snow White, Sleeping Beauty or Monsters Inc., they would probably get a little scared during this movie. But if they can get through some intimidation and short chase scenes, that's most of what is in this one. Z wasn't scared at all and, in fact, he seemed a bit bored at times when there wasn't action. He is, after all, four. I was amazed at the quality of the film and I definitely need to see it many more times because I know I missed a lot of it. I kept getting caught up in a single detail, missing the bigger action. It was technically amazing and the changed story held up well. I didn't have any problem with the addition of Wybee. I thought the ending was a little bit abrupt but I think most anything is going to be anti-climactic after being chased by the Other Mother's disembodied metallic hand.

Now I have to be a bit snarky and tell you a story. When we left the theater, we had to wait for a friend to come out and while we were waiting there was a twenty-something couple there. The guy was rubbing his eyes and the girl asked what was wrong. He said "My eyes are burning. This is what happens when you watch a 3D movie in 2D". Because everyone knows that a 2D showing of a movie is just the 3D version where they don't give you glasses, right? ;) Ahh ... I'm so mean. But come on, guy ... use a little common sense. I couldn't tell if she believed him or not.

Out to look for a copy of John Linnell's Coraline song,
K and Z
Posted by Kristen M. at 12:15 AM