"If my sister Alma had lived, I never would have begun the seances." 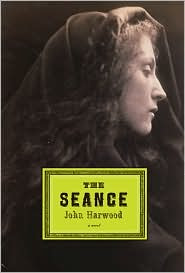 There is nothing more satisfying than discovering a new author who writes exactly what you want to read. In recent years, those authors for me have been Jasper Fforde, Michael Cox and now John Harwood. I read Harwood's first book, The Ghost Writer a few months ago. I enjoyed the book but was left a bit unsatisfied at the end. I chalked it up to the fact that it was his first novel (though he has written in other genres before). His sophomore effort, The Seance, turned out to be everything I wanted and more. The pacing is perfect, the ending was completely satisfying and the characters were familiar but somehow different.

The Seance is a story about two women in two different time periods -- Constance in 1889 and Eleanor (Nell) about twenty years earlier. Constance becomes interested in spiritualism in order to help her mother grieve the passing of her younger daughter, Alma. Then she inherits Wraxford Hall from a distant relative and the mystery and scandal that comes with it. The central character to that mystery is Eleanor, a reluctant medium and accused murderer. Constance follows the clues to discover the truth behind the two-decades-old events and to clear the name of Eleanor, whom she has developed a strange affinity for.

This book is told through various narrators, a technique first used by Wilkie Collins in The Moonstone. There are also some characters that remind one of characters in some of Collins' novels. However, this book is definitely its own story and a compelling one at that. To be honest, I pulled an all-nighter and finished it at five a.m. on the day after I began it. This book was exactly what I like to read -- a good Victorian mystery with a bit of the supernatural. I can't wait (though I will have to) for John Harwood's next novel.

Kicking the table and ringing the bell,
K