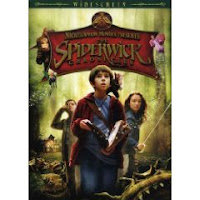 Last summer I watched Nickelodeon's The Spiderwick Chronicles because I was curious about the series and I really like Freddie Highmore who plays the twins Simon and Jared Grace. I liked it enough to want to eventually read the books and I finally got around to that over the past couple of weeks. Then I rewatched the movie today to remind myself of how they treated the story in it. If you're unfamiliar with the series, it's a set of five small books that tell the story of the Grace siblings and their adventures with the fantastical creatures that they discover living all around their new home. Their parents have just separated and they move with their mother to a home that their Aunt Lucinda used to live in. They find the secret study of their great, great uncle Arthur Spiderwick -- a naturalist of the unseen world -- and they find the field guide that he created and gave his natural life to keep safe. 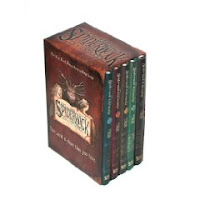 When I started reading the books, the first thing I noticed was the improved dynamic between the family members. The part of the movie that bothered me the most was the stereotyped "bad" son and the completely tyrannical and unreasonable older sister. They were very flat characters that seemed unable to learn from experience. In the books the siblings are much more supportive of each other and they change as different evidence comes to light. The adults in the book are also better characters. For some reason, in the movie, they make the father an adulterer and Aunt Lucinda Spiderwick is a weak character who gives up on life.

Overall, I think the main difference between the books and the movie is that in the books the characters are put into bad situations and come out as better people for it. They deal with things like loss and abandonment in the best ways. They work together and become a stronger family unit. I think the books are a better choice for an older child to explore. The movie is a fun little adventure but has less value as a good story.

Verdict: Read the books and watch the movie but keep them separate. They're different enough to be their own entities.

Bunnies in my yard but no fairies that I can see,
K

and The Spiderwick Chronicles

on Amazon or find them locally.
Posted by Kristen M. at 12:05 AM