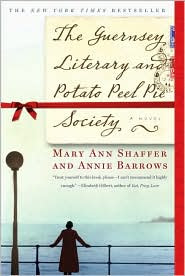 I couldn't have timed my reading of The Guernsey Literary and Potato Peel Pie Society any better. I had just become utterly depressed by the destitution of the civilian population during World War II and the magnitude of the atrocities that I read about in Winter in Madrid. Then I picked up this book, set right after the war ended, and experienced a sense of hope and renewal that was perfect for that moment.

This book, co-authored by aunt/niece pair Mary Ann Shaffer and Annie Barrows, is written as a series of letters between an author, Juliet Ashton, and the various people in her real-life and work-life. Thus, it is a quick read but such a satisfying one. Of course there are discussions of hardship and some very painful losses as they revisit the war but there are also new bonds formed that are safe from the destructive powers of the occupation that they endured on Guernsey, one of the British Channel islands.

Juliet, the main character, has much of the spunk of Helene Hanff (from 84, Charing Cross Road) but is more adventurous and able to get out into the world. She makes brave decisions but doesn't rush into anything. Ultimately, she is able to find true happiness which makes this a very sweet and satisfying story. Many people have already reviewed this book but it deserves the acclaim that it has received.

Adding the Channel Islands to my imaginary British tour,
K