"Bernie had lain at the foot of the knoll for hours, half conscious." 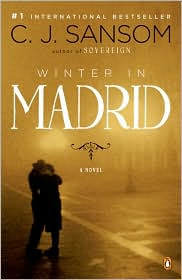 There are certain books that you know are going to end badly. Whether they begin with "This is how I died" or are based on a true story that you know the ending to, you go into the book with mixed feelings of curiosity and dread. This book, Winter in Madrid by C.J. Sansom, gave me that feeling. Being a story based in Spain under Franco's regime and during World War II, you knew that it couldn't have a completely happy ending. It would have been a farce. This book, sadly, didn't disappoint.

Set briefly in London and then in Spain, this book takes place between about 1937 and 1941. Harry Brett, Bernie Piper and Sandy Forsyth all attended Rookwood, a public school in England, when they were young. Sandy was expelled for bad behavior and Bernie became a communist and ended up fighting and presumably dying in the Spanish Civil War. Now, Harry has been asked by the British government to go to Madrid and spy on Sandy whom they think is involved with a new business venture that will possibly lead Spain to join the war on the side of the Germans. When in Spain, Harry discovers that Sandy is living with a woman he once knew as Bernie's girlfriend, Barbara. Plots twist together as Barbara discovers that Bernie is alive and in a prison camp and that she needs Harry's help to rescue him. Meanwhile, Harry tries his hand at spying but his heart is not in it.

Sansom is very clear in his writing that both sides were at fault in this time of strife and unrest in Spain. He seems to believe that the only ones that are blameless are those that remained apolitical, who only tried to survive. It is very sad to read about the poverty and famine that the Spanish people had to endure during this time, even as they were being attacked by their own government. Though this book was not predictable -- and even had a somewhat surprising plot twist near the end -- it was a foregone conclusion that all of these characters would not make it out unscathed. With the types of people that they had to interact with and the system that they had to work in, life was difficult for both the haves and have-nots.

I have read one other book by Sansom (Dissolution) and I appreciate his style and the amount of research he does. This isn't your typical spy or war novel with sex and profanity and senseless violence. It is a well-presented fiction that takes place in a time in Spain's history that was all too real. In fact, my own great-grandparents fled Spain and came to America when Franco gained control of the government. I am now motivated to find out more about their story.


Buy Winter in Madrid: A Novel