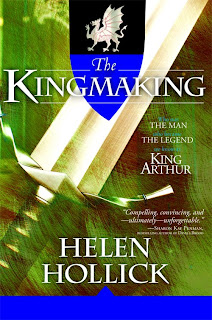 The Kingmaking, the first book in Helen Hollick's The Pendragon's Banner Trilogy, is one author's vision of the life of young Arthur Pendragon and his rise to power as King of the future British Isles. As is told in the title of this novel, this book covers the period from AD 450 to 457, when Arthur rises from being a young man of fifteen to his victory over the Saxon warlord Hengest to become a young king.

As you may know, there is much debate as to whether Arthur was a real man or simply one of legend. Tales of this great warrior king are part of Celtic mythology but there is little to no historical documentation of his existence or his story due to the fact that his rule was supposed to have happened during Britain's "Dark Ages". Therefore, Hollick was free to create a trilogy based on the various legends and suppositions that exist today. What she imagined was a man as passionate as he was intelligent. Although I liked her presentation of Arthur, the character that I really enjoyed was Gwenhwyfar. Though her true history is not known, Hollick made her into a strong horsewoman, a trained warrior and a loyal friend and lover.

The writing in these books is engaging and occasionally funny. I am really looking forward to the remaining two volumes of the story. Conflicts have been set up that have yet to be resolved and some relationships have only just begun.

This book will be released on March 1 by Sourcebooks Landmark.

Wondering if you can ever distinguish history from myth,
K


Buy The Kingmaking: Book One of the Pendragon's Banner Trilogy

on Amazon or find it at your local library.


Read other guest posts, interviews and reviews of The Kingmaking at the following sites:

On 20 Feb: Harriet Devine's Blog
On 20 Feb: Lazy Habits of Thinking (interview on 27 Feb)
On 23 Feb: Carpe Libris Reviews
Historical Novels.info
Musings of a Bibliophile
Reading Extravaganza (guest blog on 25 Feb)
On 24 Feb: Medieval Bookworm
On 25 Feb: Books are my only friends
On 26 Feb: Peeking Between the Pages (guest blog on 27 Feb)
A Hoyden's Look at Literature
On 01 Mar: Books Ahoy!
S. Krishna's Books
Jennifer's Random Musings
RhiReading
On 02 Mar: Passages to the Past
The Tome Traveller's Weblog
StevenTill.com
Savvy Verse & Wit (interview on 03 Mar)
On 03 Mar: Carla Nayland
A Reader's Respite (interview on 05 Mar)
On 04 Mar: Library Queue
the bookworm
On 05 Mar: My Friend Amy
Sam's Book Blog
Good Books, Bright Side
Posted by Kristen M. at 12:08 AM