"The first murders were committed nineteen years before the second, on a dry and unremarkable day along the Sutlej Frontier in Punjab." 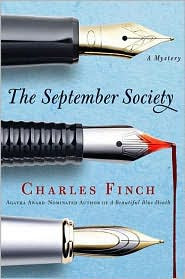 A couple of months ago I reviewed Charles Finch's first book, A Beautiful Blue Death. I really enjoyed that book and the introduction of the Victorian gentleman detective Charles Lenox. I was very excited to read the sequel, The September Society, and I wasn't left disappointed.

An Oxford college student goes missing and his mother asks Lenox for help finding him. Lenox investigates the boy's room and finds various things strewn about that are obviously clues but Lenox can't build them into any useful leads. When a boy's body appears in a field, Lenox starts understanding the clues but is in the dark on a motive. He must find links to the past and to the mysterious September Society in order to solve the mystery.

This is a very satisfying sequel. Lenox's doctor friend McConnell assists him again but he also takes on an apprentice, Dallington, a younger son of a titled friend. They are both interesting characters and add depth to the story. Lenox himself is a very noble and likeable character, a sort of anti-Poirot (Eva, you might like him). He is a detective for the sake of the clients, not his own ego, and is therefore willing to share his information with the police and the family members. He is also in love which is quite endearing. This is a great series and I hope it continues (and continues to have such attractive book covers!).

Waiting for the day I can finally set eyes on Oxford,
K

on Amazon or find it at your local library.
Posted by Kristen M. at 12:21 AM