"I am always drawn back to places where I have lived, the houses and their neighborhoods." 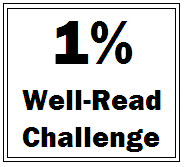 The first book I tackled for the 1% Well-Read Challenge is one I consider more of a short story at 111 pages -- Truman Capote's Breakfast at Tiffany's. After having watched the movie version with my very favorite Audrey Hepburn as Holly Golightly just short of a million times, I finally decided I had to read the story behind it all.

I was never overly fond of the plot of the movie -- I was much more in love with the glamour and Moon River and so many other little details -- but I am even less fond of the original story. It can all be summed up in this one passage (spoken almost verbatim in the movie between OJ Berman and "Fred") --

"So," he said, "what do you think: is she or ain't she?"
"Ain't she what?"
"A phony."
"I wouldn't have thought so."
"You're wrong. She is a phony. But on the other hand you're right. She isn't a phony because she's a real phony. She believes all this crap she believes. You can't talk her out of it."

I really feel that in the movie, the Holly Golightly character comes through more as a "real phony". She is strong on the outside but so damaged on the inside. I feel that in this story, she is more visibly damaged. I don't want to give anything away so I will just leave it at that but I would love to hear some other responses to this story.

Tanabata at In Spring it is the Dawn reviewed this story a few weeks ago.

After the same rainbow's end,
K


Buy Breakfast at Tiffany's: A Short Novel and Three Stories

and Breakfast At Tiffany's

on Amazon or find them at the local library.
Posted by Kristen M. at 12:03 AM