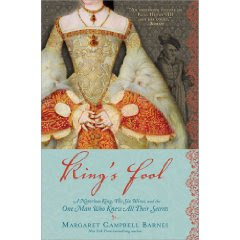 As far as historical fiction goes, one of the most visited periods is that of Henry VIII and his six wives. King's Fool by Margaret Campbell Barnes is that story with a twist -- it is the autobiography of Will Somers, court jester to King Henry.

Will Somers lost his mother at a young age and worked on his uncle's farm. He impressed a passing merchant, Richard Fermor, and was taken into Fermor's employ as a worker and scribe. When he accompanied this man to a meeting at the royal palace, he caught the eye of the King and was hired on the spot as the King's fool. Through time, Will uses his skills as a listener and a friend to become more than just entertainment. He keeps his job as he watches queens come and go and witnesses his King lose his virility and strength.

This was a very enjoyable tale that gives a brief introduction to the reign of Henry VIII. Somers was a very likeable character and the love story that Barnes added in was sweet. She is very talented at writing dialogue and at condensing large amounts of history into a short book. I would definitely like to read more of the novels that she wrote about the court of Henry VIII. This book was just re-released by Sourcebooks.

Appreciating that the fool was no fool,
K


Buy King's Fool: A Notorious King, His Six Wives, and the One Man Who Knew All Their Secrets