"Even if she hadn't been the last person to walk through the turnstile ... Jack Barker would have noticed the tall, slender woman ..." 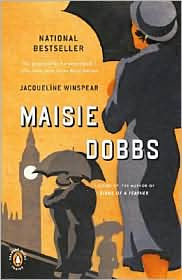 I may be the last historical mystery fan on Earth to start reading this series but I am now a fan of Maisie Dobbs! This first book in Jacqueline Winspear's series about a woman in post-WWI London is both mystery and back story for Maisie. It had a good amount of suspense but also some depth in the analysis of the effect of the war on those who participated in it. It also touches on the subject of the British classes before and after the war.

The best thing about this book, though, is Maisie herself -- the parlormaid turned university student. Her tutelage by Maurice Blanche turns her into the consummate detective but also the perfect friend. She knows the value of sympathy and empathy, listening and suggesting, action and inaction. From Blanche she gained both intelligence and wisdom. Yet, all of these things are less than satisfying after she loses the one thing that she never thought about having -- love.

Feelings seem to run hot and cold for this series but I have fallen for it. I will try not to read through the remaining books too quickly!

Content with the aquisition of a new literary friend,
K