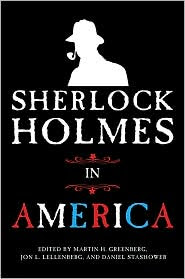 It has probably been a decade since I read through all of Arthur Conan Doyle's Sherlock Holmes stories so it was nice to revisit the character in the newly released Sherlock Holmes in America. With a foreward by Daniel Stashower and also including a dinner speech about America from Conan Doyle himself, this collection of short stories about Holmes is literally all over the map ... of America.

Some stories in this book feature Holmes by himself, some with Watson, a couple with his brother Mycroft and one story even stars a young Harry Houdini picturing himself as Sherlock Holmes. The stories take place in such varied places as San Diego, Salt Lake City, San Antonio and Boston. Some of the stories are based on previously written Holmes stories and others are completely new. Most of the mysteries are somewhat simple but the characters are complex and interesting. Even if you haven't read any Sherlock Holmes stories before, this book stands alone fairly well.

One of the prevailing themes is that America is a country of action and of survival. In Conan Doyle's words:

These things are the romance of America, the romance of change, of contrast, of danger met and difficulty overcome, and let me say that we, as your kinsmen, upon the other side, exult in your success and in your prosperity ...

This book is chock-full of award winning American writers and the variety of styles and themes is refreshing and fun.

on Amazon or find it at your local library.
Posted by Kristen M. at 12:10 AM