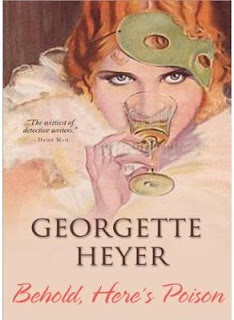 The final Georgette Heyer mystery that I read was Behold, Here's Poison. This one was really less a mystery than a family dynamics story. The cantankerous patriarch of a family is murdered with an obscure poison and it brings out the worst in everyone involved -- his sister, his sister-in-law and her two children and his nephew. They all had something to gain from his death and yet his death seems to make them all more miserable and it brings out the worst in them.

There is a surprise romance in the story that is somewhat unexplainable and strange. The mystery is also solved in a slap-dash manner with no real clues presented through the story. However, despite these shortcomings, this is still a good read as just a general fiction story.

One last thing that I wanted to comment on is the series design. I really love the period artwork that Sourcebooks chose for the covers of these mysteries. The color palette for the series is also really pleasant. This will be a nice set to collect!