New Release: Why Shoot a Butler? 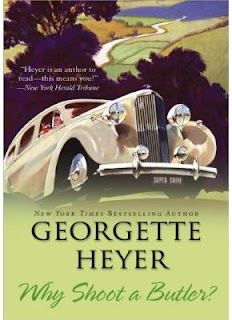 Why Shoot a Butler? is the first mystery that I read by Georgette Heyer. Let me tell you, I was pleasantly surprised! This was all I could have wanted in a mystery and, for standard Heyer fans, there was even a bit of romance.

Since I posted the jacket blurb yesterday, I'm going to be really brief on the plot summary. Frank Amberley is a successful barrister in London but is known in this country neighborhood (where he has gone to visit his aunt and uncle) as an amateur sleuth due to his help solving an earlier crime in the area. On his way, he takes a wrong turn and finds a dead man in a car and a young woman standing nearby. He decides that he is going to get involved in the solving of the crime and in the protection of the girl.

I will admit that Amberley is not the most likable character. He's rude and smug -- think Mr. Darcy but even less sensitive to people's feelings. In fact, not many characters in this book are wholly likable--most are flawed in some way--and yet it works. The characters certainly seem less one-dimensional than many in Agatha Christie's stories. Amberley's aunt was an especially fantastic character who wasn't to be underestimated. The romance could be seen coming from a book length away but it was still sweet. The mystery was acceptable and this is a good example of a mystery that gives you some of the clues along the way so that you can solve it yourself. I'm very excited to move on and read my next Heyer mystery!

Why shoot a butler indeed,
K


Buy Why Shoot a Butler?

on Amazon or find it at your local library.
Posted by Kristen M. at 12:19 AM