"In an unremarkable room, in a nondescript building, a man sat working on very non-nondescript theories." 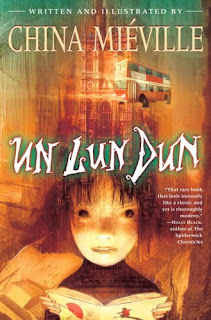 One book that I have looked at various times yet never picked up until now is this one, Un Lun Dun by China Miéville. The girl on the cover caught my attention as did the ghostly building and the color scheme. I can't deny being intrigued by the author's name and the strange title as well. This is British author Miéville's first foray into fiction for a younger audience and he is the writer as well as illustrator of this amazing story. It is fantasy in the vein of Alice in Wonderland, the films of Hayao Miyazaki (Spirited Away) or the novels of Neil Gaiman.

Pronouncing each syllable to rhyme with "fun", you soon realize that the place the title refers to is UnLondon. UnLondon is an "abcity", a sort of mirror city where everything is different but related to the real city. UnLondon is in trouble from a large toxic cloud called "Smog" and their prophecies speak of a young girl who will come and save them all. They believe these predictions are coming true when Zanna comes through into their world, bringing along her friend Deeba. However, when Zanna is hurt and is forced back to the real world, Deeba has to take on the task of saving UnLondon herself. With the help of unique characters she meets along the way, she begins to understand that being the un-hero might be the only way to save the un-world.

I can't believe I didn't pick up this book sooner! It's exactly the sort of fantasy I like with alternate worlds and strange characters and rules. There is no word of a Miyazaki movie based on this book yet but it would be perfect with its young heroine, the strange world of repurposed gadgets and machines, the environmental message and the cast of bizarre but fascinating supporting characters. This book completes my first task in the Take A Chance Challenge -- "Judge A Book By Its Cover". I judged correctly this time!

Refreshed after my journey to UnLondon,
K