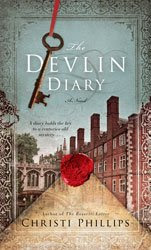 The second novel by author Christi Phillips is the newly released The Devlin Diary. I recently reviewed her first book featuring the brainy but impulsive graduate student, Claire Donovan. I liked the strong back story and the discovery aspect in the first novel but thought a few of the characters seemed a bit over the top. This second foray into the world of historical research fiction is more of the same but, unlike the first, actually reads more like two unrelated stories -- both are interesting but the marriage between the two isn't convincing.

Claire is back as a guest lecturer at Trinity College, Cambridge, thanks to her strong research skills and newly minted PhD. If she has a successful guest year, she will be offered the position of fellow. She quickly finds that she has trouble navigating both the world of professional academia and the social rules of the British. When a colleague steals Claire's research idea, she confronts him--and punches him in the face--in front of a large number of witnesses. When this man turns up dead the same night, details start emerging about both his personal and academic lives. Claire must navigate this minefield to reclaim her research topic and to find out the secret that this man was trying to reveal.

In the seventeenth century, Hannah Devlin, is a non-licensed female physician. She has lost everything else in her life--father, husband, child--and has thrown herself into her work. When she is ordered to attend to the mistress of the king, she has no choice but to obey or be prosecuted for her profession. Once in court, Hannah learns that there is some mystery behind the death of the king's sister, Henriette-Anne, a few years prior and that those with knowledge of this event are starting to turn up dead. When her father's death is linked to this same serial killer, Hannah feels compelled to bring the truth to light.

Though Claire finds Hannah's diary near the beginning of the story, she doesn't even begin to understand what it is about until over half-way through the book. And then she doesn't even really research to solve the mystery but only needs to translate the shorthand of the diary for Hannah to reveal all. The stories have some forced parallels written in (choosing the "right" man or the more glamorous man) that don't necessarily ring true either. Still, this wasn't a terrible choice for a summer read. I just didn't feel it had some of the strengths of the first book. I will admit enjoying the descriptions of Trinity College and the Wren and Pepys Libraries though! Please go see some of the other reviews on the blog tour today. I'm sure there will be many varying opinions on this one!

Wondering what I would sacrifice for my career,
K

on Amazon or find it at your local library.


This book is being reviewed at some of the following sites today:
S. Krishna’s Books
All About {n}
Jenn’s Bookshelf
Beth Fish Reads
Booking Mama
The Literate Housewife Review
Book Soulmates
Chick With Books
Gimme More Books
Book Bird Dog
Bookin’ with “BINGO”
My Friend Amy
Books and Needlepoint
A Working Title
Must Read Faster
Shhh I’m Reading
Debbie’s World of Books
The Tome Traveller’s Weblog
Write for a Reader
A Sea of Books
I Heart Monster
Pick of the Literate
Kingdom Books Blog
Drey’s Library
The Jaydit Reader
A Book Bloggers Diary
Posted by Kristen M. at 12:12 AM