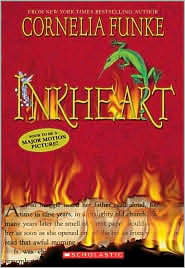 First in a trilogy, followed by Inkspell and Inkdeath, Inkheart by Cornelia Funke is everything I love in a children's fantasy book. She writes of fear and hope, bravery and cowardice, humor and sadness, imagination and reality -- all without any gore.

Meggie is a twelve year old who has literally lost her mother. When she was three years old, her mother disappeared under circumstances that her father, Mo, keeps to himself. Mo repairs old books and they move and travel pretty constantly. One night Meggie looks out the window of their farmhouse to find a strange, disheveled man looking back in at her. She tells Mo and he actually invites the man in, calling him Dustfinger. Dustfinger calls him Silvertongue. Meggie tries to find out what this could be about but only overhears part of their conversation about someone named Capricorn who has sent men after them to get something he wants from Mo. Meggie asks her dad what this is about but he isn't ready to tell her yet. Instead, they travel to Italy to her aunt Elinor's house. There Meggie finds out--again by spying--that the item that Capricorn wants is a book called Inkheart. Unfortunately, Capricorn's men find them there and they must fight for their freedom and their lives.

I loved this book and am a bit annoyed that I didn't pick it up until now. The pacing and suspense in the book were really well done. I was tense during escape attempts and ecstatic when something goes right for Meggie. This book is written for an older child but I think it works well for all ages above that. The writing doesn't seem like it was especially directed toward a young audience except for the quick pace and relatively short descriptive passages.

Now, as this is a book versus movie post, I will tell you about Inkheart the movie. As a film, it's acceptable. The special effects were done well and Helen Mirren, Jim Broadbent and Andy Sirkis did fantastic jobs with their roles. But as a retelling of this fantastic book, it's terrible. It does all of the things wrong that the Harry Potter movies have done right. How could they take an ultimate villain and make him a henchman? How could they take the real evil henchman and turn him into comic relief? How could they turn a willful but innocent young woman into a murderer? How could they turn a misguided but heartbroken rogue into a milquetoast family man? This movie did something that it's difficult to do -- it made me angry at the many ways that they distorted and ruined the book. I'm not a big stickler for book/movie syncing because I know how difficult it can be to translate every scene to the big screen. However, the spirit of the book should be projected and the characters that they use should be true to the book as well. This did not happen with Inkheart.

Verdict: If you read the book, which I highly recommend, then DO NOT watch the movie. It's really quite bad.

I read this book and watched the movie together for Jenners' Take a Chance Challenge. I had originally planned on a different pair (Portrait of a Lady by Henry James) but have had my eye on Inkheart for a couple of years so I took a chance and got the book and DVD. I will definitely read the next books in the series and probably many more of Cornelia Funke's books but I hope to never see the movie again. Luckily, they didn't actually seem to leave the story in a way that they could finish the trilogy of movies.

Wondering what book I would bring to life,
K


Support our site and buy Inkheart

(the book) on Amazon or find it at your local library.
Posted by Kristen M. at 12:14 AM