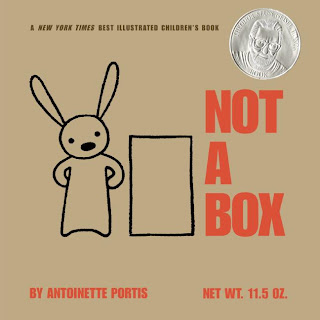 Antoinette Portis understands the minds of children. What could be more fascinating to a child than the most mundane objects. Why? Because they have the potential to be anything at all. In her first book, Not A Box, a little bunny has adventures in a cardboard box. Each time his parent questions why he would be playing in a box, he tells them simply "it's not a box". Then there is an illustration of what the bunny is imagining. First it's a racecar, then a mountain peak. It becomes many different things in the mind of the bunny and everything is fun and exciting. Finally he has to give it a name and he calls it his "Not-a-Box". The illustrations are simple line drawings that even leave some of the imagining up to the reader. It's got a fresh look with bright colors and the ability to get a child thinking out of the box, so to speak. 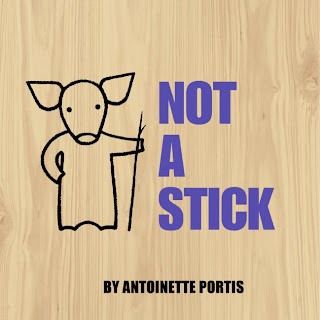 Portis followed this book up with the similar Not A Stick. This one has a little different premise in that the parent is worried about the little piglet playing with the stick. But each time they say "be careful with the stick" or something similar, the piglet says "it's not a stick". This one is a bit more predictable with the stick being a sword, a fishing pole and other typical kid props. Still, it's his "not-a-stick" and he has infinite amounts of fun with it.

Of course, with a five year old boy, I've experienced these books first hand and I love that it's something that Z can really relate to. He loved shouting out what each imaginary situation was. He also liked the simply drawn animals. After we read the book, we talked about some other things that a box or a stick could be. I loved this chance to turn our reading into a conversation and imagination session! These are great books for about three to six year olds.

It's not a couch, it's a lounge chair on a Maui beach,
K and Z


Support our site and buy Not a Box

and Not a Stick

on Amazon or find them at your local library.
Posted by Kristen M. at 12:14 AM