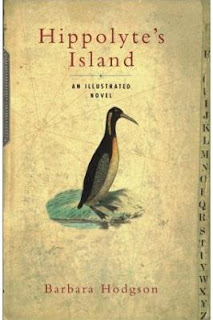 One of the books that I bought recently in Barnes and Noble's big clearance sale based mainly on the cover image was Hippolyte's Island by Barbara Hodgson. This is billed as an illustrated novel but not in the way you might imagine. The first half of this book is the travelogue of a journey of exploration, including sketches, charts, maps, photographs and other related things.

It's difficult to summarize this book in a way that doesn't sound completely boring but to me it really wasn't. It's the story of Hippolyte Webb, a man in his late thirties who has so far in life traveled only in the Northern Hemisphere. He started a travel magazine and has written various travel articles. Now, though, he's bored. So he takes his rickety old globe whose two halves have shifted a bit and draws a line from Vancouver due south and ends up in the South Atlantic. His line goes right through three small, unlabeled dots between the Falkland Islands and South Georgia Island. He starts searching old maps and finds a few that name these islands -- The Auroras. Hippolyte becomes obsessed with the Auroras and decides to travel there. He takes sailing classes, secures an advance for a book about his journey and heads through South America down to the Falklands. From there he charters a boat and sets off toward what he believes are the coordinates of these mysterious islands. He records his experiences and at the end of the month-long journey returns home to write his book.

The second half of the novel is about Hippolyte's experiences with the publishing house and the editor that is assigned to him. I don't want to talk too much about this part because things that are revealed in it make you question what you were told in the first half of the book. This part is about belief, trust and emotion.

This book was interesting and different. I really enjoyed the natural history parts of the story but I know that some people might find them dull or hard to understand. There are also a decent amount of sailing terms and descriptions that I know nothing about but I took it as a chance to learn something new. If you are feeling adventurous and want to try a different sort of novel, you might want to take a trip to Hippolyte's Island.

Wishing I didn't get seasick,
K


This book is out of print so you will need to find it used or at your local library.
Posted by Kristen M. at 12:06 AM