"It was the week following Easter in Reading, and no one could remember the last sunny day." 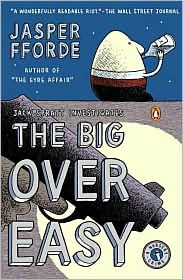 After reading the entire Thursday Next series multiple times, I still wanted to read more from Jasper Fforde. I was wary of the Nursery Crimes series because it seemed just a bit too silly and I didn't really understand how it could be executed well but after finding a hardcover version of the first book, The Big Over Easy, at an unbeatable price, I decided to give the series a go.

This book takes place somewhat in the same England that Thursday Next lives in. However, in Reading, besides the normal crimes and normal police force, there are also "nursery crimes", investigated and solved by the Nursery Crimes Division, currently headed by Detective Inspector Jack Spratt. These are such things as the murder of Mr. Wolff by the three little pigs and a "spinning-straw-into-gold scam" perpetrated by Rumplestiltskin. These people all function in normal society but tend to fulfill their nursery-rhyme-foretold destinies. The main crime in this story is the death of Humperdinck "Humpty" Dumpty. Did he fall or was he pushed? Why was he amassing stock in a footcare products company? Why were the ladies so attracted to an egg? Okay, so that question isn't answered in this book but I wish it had been!

It took a few chapters to acclimate to Fforde's created world but the story was quite interesting and I'm rather glad I finally decided to read this one. I don't think this is a series for everyone because it's a bit far-fetched and silly but at the same time it's hilarious and imaginative. Just like the Thursday Next series, this is definitely something different than anything you've read before. The second book in the series is The Fourth Bear, which I also happened to find in a hardcover at a reasonable price and will probably be reading soon.


Buy The Big Over Easy: A Nursery Crime