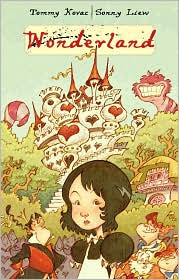 I'll admit it ... I'm a toe-dipper. There's no jumping off the high dive for me. When I want to try out a new or seldomly read genre, I'm going to do it in the least risky way. This time it was the graphic novel Wonderland, written by Tommy Kovac and drawn by Sonny Liew and compiled from six individually released comics. I am a huge fan of Alice in Wonderland and this comic, based on both the Disney film and the original story, seemed like an easy way to explore a medium of story-telling that I rarely visit.

This is the story of Mary Ann ... yes, *the* Mary Ann ... maid in the household of the White Rabbit. She returns after Alice's visit to Wonderland and becomes enmeshed in the mess that Alice has left behind. Fans of the film will love the use of the Disney-imagined characters (like the fuchsia and lavender Cheshire cat and the flag-capped Tweedle-dee and Tweedle-dum) and also the little unrelated homages to the film (like the "little oysters" traveling across the beach). Fans of the original story will appreciate the use of the full "'Twas brillig" poem and the subsequent appearance of the Jabberwocky.

It takes me a little while to get used to the verbal simplicity of a graphic novel and to look away from the words and appreciate the other elements of the story that are shown visually. I think that this one warrants a second read-through to absorb things that I missed the first time through. I enjoyed reading this one!

Admitting that one of my favorite words has always been "outgrabe",
K


Support our site and buy Wonderland

on Amazon or find it at your local library. We borrowed this one from the library.
Posted by Kristen M. at 12:14 AM