"My favourite thing to do in London is to fly the Eye." 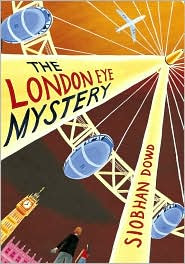 I've had The London Eye Mystery by Siobhan Dowd on my reading wish list for a long time. I enjoy young detectives and thought this would be a fun, light read. In fact, it turned out to be a very different type of story.

This is the summary from Barnes and Noble --

Ted and Kat watched their cousin Salim board the London Eye, but after half an hour it landed and everyone trooped off—except Salim. Where could he have gone? How on earth could he have disappeared into thin air? Ted and his older sister, Kat, become sleuthing partners, since the police are having no luck. Despite their prickly relationship, they overcome their differences to follow a trail of clues across London in a desperate bid to find their cousin. And ultimately it comes down to Ted, whose brain works in its own very unique way, to find the key to the mystery.

I don't know if it was purposefully written this way so as to not scare away readers but they glossed over what it turns out is the major focus of the book -- Ted, the twelve-year old narrator, has Asperger's Syndrome. His unique way of looking at things is what allows him to solve the mystery of his missing cousin.

I thought there were some good things and some not as good things about this book. I thought that a lot of the adult emotions and behaviors that were explored in this story were possibly a bit too intense for the target age group for this book. I think that you have to be careful when writing about subjects like child abduction for children. As a parent, it was hard for me to read about Salim's mother and her reactions and emotions after she discovers he is missing. I did like that the brother/sister relationship between Ted and Kat was realistic in that they got along some of the time but clashed at other times. I always appreciate when siblings have balanced interactions. So I guess I liked the realism in some parts but found it to be a bit much for a youth book in other parts.

The mystery was an intriguing one but the main problem I had was that I figured out the solution in the same scene where the mystery was unfolding -- for the exact reason that Ted figured it out later. The thing is that if he was so focused on patterns and numbers and such, I have a feeling that he would have figured it out just as quickly. So his strengths were suppressed for the sake of the story which bothered me a little bit. Still, I think this book would be a great learning experience for an older child or even an adult who is curious about kids with autism and how they can use their differences to their advantage.

Investigating the mysteries of the human mind,
K


Support our site and buy The London Eye Mystery