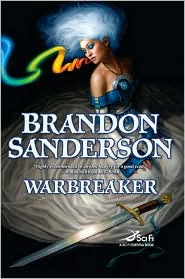 I now realize that saying "I don't read fantasy" and "I don't like fantasy" are two very different things. I don't read very much fantasy but I've enjoyed the few that I've chosen to read in recent years. The latest is Brandon Sanderson's new novel Warbreaker. He has gone to great lengths to create a unique world with its own religions and politics and the result is almost flawless.

Siri is the youngest princess in the kingdom of Idris. She has had an easy life since she is not destined for any particular fate. When the time comes to send her oldest sister Vivenna to marry the God King of neighboring Hallandren, the King decides he can't surrender his favorite daughter and so at the last minute he sends Siri instead. Now Siri must do her best to please an immortal King that she knows nothing about. At the same time, Vivenna sets out to Hallandren in hopes of rescuing Siri from what she believes is certain death. As they both enter a culture that is basically the opposite of their own, they must quickly learn who to trust and how to act in order to survive.

The religions created and deconstructed in this novel are fascinating. In Idris, they worship one god -- Austre, the God of Colors. The people of Idris dress in drab browns and live in modest homes. By contrast, the people of Hallandren wear gaudy clothing and live in bold-colored homes. They worship many gods that are the "Returned" -- people who have died in heroic ways and then returned from the dead. They are kept immortal by draining the colors from regular citizens which they will one day use to heal a single citizen and thus end their immortality. Many of the common questions about faith and religion are addressed in this fictional world in a very intelligent way.

There are many more characters and side plots in the novel and they are all well-written and interesting. There are a few twists and turns that keep the reader on their toes. One premise of the novel seemed a bit "gamer-ish" with certain numbers of "breaths" bestowing powers or heightened senses. It seemed strange that these people would be able to count something as light as a soul. It sounded like a game with "lives" and "hit points" and all of that. But really, this was a very tiny complaint and I accepted it and forgot about it after a while. I enjoyed this novel much more than I expected to and I need to remember to keep an open mind about reading different genres.


Support our site and buy Warbreaker

on Amazon or find it at your local library. We received our copy for review from the publisher.
Posted by Kristen M. at 12:16 AM