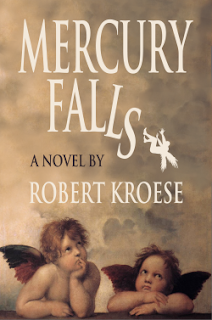 If Kevin Smith's film Dogma and Neil Gaiman and Terry Pratchett's novel Good Omens had a witty yet mature baby, it would be Robert Kroese's Mercury Falls. This novel about the Apocalypse is well-researched and amusing.

Christine Temetri is a journalist who has somehow ended up covering third-rate Apocalyptic cults for The Banner, a very prominent religious news magazine. After yet another eventless sunrise in the desert with a "prophet" and his followers, she has decided she is done with the work. When she gets back to Los Angeles, though, not only has her apartment been shoddily vandalized but her boss has a last-minute assignment for her in Israel. What she learns from her contact there and from her first near-death experience convinces her that the Apocalypse may actually be approaching. Meeting Mercury, a rogue angel, is just the icing on the cake. If she could only convince him to help, they might be on the way to saving the world.

This is a really funny book -- rarely laugh out loud funny in a Douglas Adams way but more like "snicker and snort" humor. For some reason it reminded me of late night group discussions at Denny's when my friends and I were twenty-somethings with nothing else to do. It has a really comfortable, easy tone through most of the book. It takes a few potshots at both religion and atheism but a light way. It also takes a mildly serious look at the various "signs" and "happenings" of the Apocalypse and imagines a possible way for it to all unfold. There are seraphim and cherubs, demons and The Devil, and even an overweight, loser Antichrist named Karl Grissom who won the title in a contest.

Mercury Falls is a self-published book but I didn't feel that there was any problem with the quality of the writing or the story. In fact, I hope that this novel finds its audience and a publisher because this is a bright first novel and I would love to see what the author creates next. You can visit his website for more reviews and background.

Wondering if it's safe to upgrade our flooring, (it's an inside joke)
K


Support our site (and Rob's dream) and buy Mercury Falls