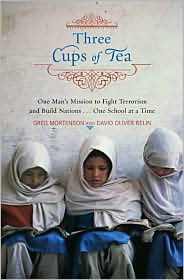 It seems like I've been writing a lot lately about book genres that I don't regularly read. Well, yet another one is modern non-fiction. I read recently-written non-fiction but usually about subjects that are at least fifty years old -- history, biographies of long dead people and the like. So when I ended up with Three Cups of Tea: One Man's Mission to Fight Terrorism and Build Nations ... One School at a Time for a challenge, I knew it would be an adventure. This is the story of Greg Mortenson-- as told by journalist David Oliver Relin --and the time he has spent in Pakistan and Afghanistan in the past twenty years.

Greg's first trip to Pakistan was to scale K2. When things went wrong during the trip, he ended up in the remote village of Korphe. He became close to the head of the village and his family and made a promise that he would return and build the children of Korphe a school. Through many years and multiple return trips to the region, Greg eventually built the school and became something of a local legend -- so much so that other villages approached him for help. He successfully started a non-profit organization that managed the schools and their expansion and everything was going well until September 11, 2001 when the region became America's number one target. Still, Greg has tried to continue fulfilling his dreams and the dreams of the fathers, mothers, sons and daughters of Pakistan.

This is one of my final selections for the Take a Chance Challenge. It was for the Public Spying task.

Find someone who is reading a book in public. Find out what book they are reading and then read the same book. Write about it.

I saw plenty of people reading but always forgot to look at their books or just couldn't bring myself to read what they were reading. When I saw another mother at Kindergarten pick-up reading Three Cups of Tea, I decided to read it even though I wasn't sure I would enjoy it. I'm glad I took the chance though because I learned a lot about Pakistan, Islam and another side of our current conflict. It's somewhat disheartening to realize that this book was published in 2006, five years after the terrorist acts against America, and yet the war still hasn't ended. But hopefully the seeds of change that Greg Mortenson is planting will reduce radicalism and terrorism in the future.

If you are interested in Greg and the Central Asia Institute, you can visit their website. Also, a follow up book to this one, Stones Into Schools: Promoting Peace with Books, Not Bombs, in Afghanistan and Pakistan, will be released next week.

Realizing peace is built in one heart at a time,
K
Posted by Kristen M. at 12:15 AM