"It wasn't a very likely place for disappearances, at least at first glance." 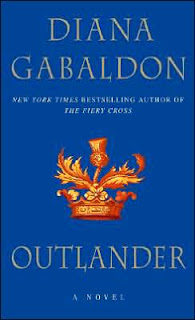 Before I forget ... can we just take a look at the book cover here?  This is the cover of the FIRST book of the series that is advertising "bestselling author of ..." the FIFTH book of the series.  This wasn't the book that inspired my first Bookish Pet Peeve post but now I feel vindicated in pointing it out because it obviously happens at least somewhat frequently!  I think I just started really noticing it.

Moving on ... I received a promotional copy of Diana Gabaldon's Outlander last fall when everyone was talking about the impending release of the seventh book in the series.  It sat on my shelf until now -- partly because of its 850 pages, partly because I knew that many readers either loved it or hated it and I was scared to start a tome that I may not like.  I kept meaning to pick it up but then I would choose a safer book or a different review copy.  Finally, I guaranteed that I would get the book read this year by choosing it for one of my Take Another Chance Challenge tasks.  This was the one for Task 3: 100 Best Book.  I went all out in the "take a chance" aspect of the challenge, clicked on the link for "100 Best Romance Novels of the 20th Century" and, lo and behold, Outlander was number one on the list.

If you're not familiar with Outlander or the series, it's the story of a British woman, Claire, who falls into a stone circle in Scotland in 1945 and emerges in 1743.  She is forced to navigate a world she doesn't know and to try and return home -- except after a while she starts to question where home really is.

I was definitely curious about what would happen to Claire but I didn't really like her character.  However, there were enough other interesting characters in the book to keep me reading.  I also really enjoyed the setting and language of 18th century Scotland -- it felt authentic and alive.  There were so many things to learn and even the geography and natural history of the land became a character in the story.  I won't be rushing out to get the next book in the series--after all, it's another 750 pages and I'm a busy reader--but I am now invested enough to want to continue the series at some point.

Back to the Take Another Chance Challenge ... did I think this was the "Best Romance Novel of the Twentieth Century"?  Probably not.  I'm not an expert on romance novels and there's no denying that it was romantic but I'm sure that there must be some novels out there that don't have the amount of moral ambiguity that this one does.

Enjoying all the conveniences of modern life and love,
K


Support our site and buy Outlander

on Amazon or find it at your local library. We received a promotional copy from the publisher.
Posted by Kristen M. at 12:14 AM