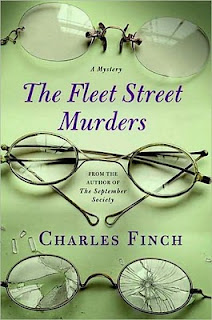 After a fantastic first book and a strong second one, I was very excited to have the third Charles Lenox mystery released. Charles Finch has created a rather unique Victorian gentleman detective who uses his ample resources and also his strong intellect to solve the most difficult crimes in London. The Fleet Street Murders takes a slightly different direction than the first two novels, keeping the series fresh and creating room for the main character to grow.

As is always the case in a series, it's impossible to summarize the story without giving at least a bit of information away that was revealed in the first two books.  So here's fair warning that there might be some mild spoilers to follow.

Charles Lenox is a second son whose older brother has a seat in Parliament -- the same seat their father held for many years.  Though Charles has enjoyed his life of leisure, planning travel and pursuing his detective career, he also is jealous of Edmund's position and his ability to help the country.  When the chance comes for Charles to run for a vacant seat in a Northern town, he decides to go for it -- even if it means giving up his freedom to be a detective.  Of course, he is soon torn between the two callings when a major case comes up in London and he is asked to assist.  Which life of public service will Charles ultimately choose?

This book was different in that it spent more time exploring Charles Lenox's personal relationships and gave quite a bit of insight into the Victorian political process.  The mystery part of the story was still strong and I can only hope that the series will continue.  Finch has a very clear writing style and I really enjoy his books.  I've borrowed the entire series from the library but have these on my wishlist as well because I would love my own copies!


Support our site and buy The Fleet Street Murders

on Amazon or find it at your local library. We borrowed our copy from the library.
Posted by Kristen M. at 12:16 AM