"The family of Dashwood had been long settled in Sussex." 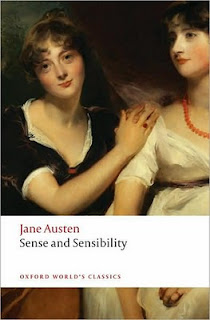 I have avoided reading Jane Austen's Emma because I find Emma's character in film versions to be quite repulsive through most of the story.  I saved that novel for last, assuming it would be the Austen that I would enjoy the least.  I never guessed that Sense and Sensibility would be so infuriating and would not have a single character that I did not find significantly deficient in some way.  In the next couple of weeks, I will be reading Sense and Sensibility and Sea Monsters for the Chance Challenge (Challenge 8: Real and Inspired) and I can honestly admit that I will be rooting for the sea monsters.

Elinor Dashwood and her younger sister Marianne experience a change in situation when their father dies and leaves his estate, Norwood, to their half-brother.  They, along with their mother and younger sister, find themselves in reduced circumstances and they end up moving to a cottage on the estate of a distant relative.  It appears to be sufficient for their needs and they settle in nicely.  Elinor pines for Edward Ferrars, her sister-in law's brother, and Marianne meets the handsome and sporty Willoughby and both sisters seem headed on their way to marriage.  It's quite a surprise then when Willoughby leaves town quickly and unexpectedly and Edward starts behaving with a strange reserve toward Elinor.  What could be the source of trouble for these two seemingly well-matched couples?

I really didn't have a problem with Austen's writing or storytelling in this book.  I understood many of the social complexities that she was attempting to highlight.  And yet I found every character to be flawed just past the point where it was tolerable.  I didn't want to stop reading the book before it was done but I felt that each character received more than they deserved by the end of the story.  At least in Emma I am assured of a few characters worthy of respect and the eventual improvement of Emma herself.  Now on to the sea monsters ...

Wishing I had re-read Persuasion instead,
K


Support our site and buy Sense and Sensibility

on Amazon or find it at your local library. We bought our own copy of it.
Posted by Kristen M. at 12:07 AM