New Release: The Agency: A Spy in the House 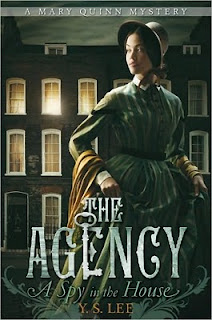 When I saw Y.S. Lee's YA mystery novel The Agency: A Spy in the House advertised, I was excited enough to request a review copy from the publisher.  I've always thought that there need to be more children's and YA books with a Victorian setting.  I shouldn't have had to wait for my mom to hand me Jane Eyre before I visited Victorian England for the first time.  Coupled with the fact that this is a mystery and that it deals with education for girls, it seemed to have everything going for it and so I bumped it up in my reading queue.

The book begins as twelve year old orphan Mary Lang is about to be hanged for theft.  As she's being lead back to the cells after sentencing, she is saved by a group of women who look for promising young girls to educate -- girls that have the potential and inner strength to become more than scullery maids or wives.  Mary accepts their offer, takes on the name Mary Quinn and spends the next few years at their school, becoming educated and learning to act like a lady despite her low birth.  And yet, at the end of her time there, she finds herself without a vocation.  She doesn't feel cut out to be a teacher, nurse or clerk so she approaches the leaders at the school to see if they have any suggestions for other professions that she might try.  They do, in fact, have a suggestion but it's so out of the norm that Mary hesitates for a moment-- but only a moment --until she accepts their uncommon position -- a woman spy in Victorian England.  She trains and is sent on her first mission where it is up to her to use everything she has learned and secure her future.

I wasn't sure at the start of the book what direction it was going to take but, once it got going, I found myself fully invested in Mary and her future.  The main story is a standard Victorian mystery that reminds me of Georgette Heyer or Agatha Christie but Lee adds a twist to Mary's story that gives this book surprising depth and heart.  I won't say more than that because it really is a wonderful thing that Lee has done and I don't want to ruin it for anyone.  My quibbles with the book were only because I wished it was an adult novel and more fleshed out.  But as a YA novel I think it's quite good.  The ending was also unexpected and made me believe in Lee's vision of the independent Victorian woman.  I will be first in line to buy the second book in this series, The Agency: The Body in the Tower, when it is released in September.

This book will be released in the U.S. next week.  I believe it's already available in the U.K.

Taking a unique trip to a familiar place,
K


Support our site and buy The Agency: A Spy in the House

on Amazon or find it at your local library. We requested an advance reading copy from the publisher.
Posted by Kristen M. at 12:08 AM

Email ThisBlogThis!Share to TwitterShare to FacebookShare to Pinterest
Labels: fiction, mystery, YA fiction