"It was early morning on Saturday, the sixteenth of December, the first day of the Christmas holidays." 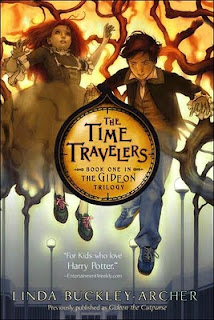 Originally released as Gideon the Cutpurse, book one in Linda Buckley-Archer's Gideon Trilogy has been re-released as The Time Travelers.  Both titles are too simple to bring readers into this fascinating and complex book.  While I was reading it I couldn't help but think that it seemed like a version of Outlander for kids.

Peter Schock is a lonely twelve year old with a workaholic father and an absent mother.  When his father cancels his birthday celebration for the third time and sends him on a trip to a farm with his au pair, Peter's only words for his father are "I hate you".  Unfortunately, when Peter gets to the Dyer farm and sets off with scientist Dr. Dyer and his daughter Kate, something goes terribly wrong and Peter regrets those last words.  Peter and Kate are sent back to 1763 by an anti-gravity experiment gone awry.  They, of course, don't know this at first and are confused to find an empty valley where Kate's house normally sits.  They are also confused by the rogue in costume that calls himself the Tar Man and who steals the machine that traveled with them.  Luckily, their next encounter is with a much more friendly man -- the young Gideon Seymour -- a handsome man heading to a new position as manager of the Byng estate.  Gideon promises to help Peter and Kate return to their own time and they have many adventures that give them a good idea of life in eighteenth-century London.

Though the kids encounter too many historical figures in their short time in the past and too many characters are readily willing to believe their outrageous story, I became totally engaged in this book.  It is part mystery, part adventure and part history lesson.  It has complex characters and terrifying villains.  I can't wait to read the second in the series, The Time Thief, and will probably read it sooner than later to find out what comes next after the cliffhanger ending.


Support our site and buy The Time Travelers (a.k.a. Gideon the Cutpurse)

on Amazon or find it at your local library. We borrowed our copy from the library.
Posted by Kristen M. at 12:15 AM