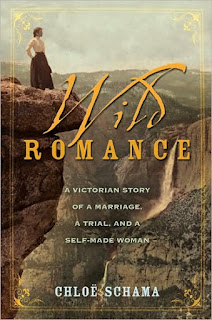 Sometimes when I read about a strong woman in an oppressive society, I wonder how much of the "history" is really just wishful thinking on the author's part.  And yet it was easy to believe the story of Theresa Longworth because of the straightforward way that Chloe Schama has presented the facts in Wild Romance: A Victorian Story of a Marriage, a Trial, and a Self Made Woman.  Alas, this presentation of straight facts is also the main weakness of the book.

Theresa Longworth was a nineteen year old girl who fell in love during a steamer trip with the man who rescued her errant shawl.  The man, William Charles Yelverton, was a soldier, always on the move.  Fortunately, Theresa also felt the pull of exploration and she traveled as a nurse and with various friends and family members -- sometimes meeting up with Yelverton in foreign locations.  Through the following years, Yelverton and Theresa exchanged many letters that showed Theresa's independence and free spirit and Yelverton's ambivalence about this woman that he rarely saw.  When they ended up together in Scotland and Theresa orchestrated a secret wedding (based on Yelverton's purported family issues), Theresa thought she had finally achieved what women of her era were taught to want.  But when they spent time apart after the wedding, she came back to find that Yelverton had romanced and married a widow.  Theresa was forced to fight a court case for her rights -- a case in which her character was laid open through the aforementioned letters.  The years the various trials dragged through changed her life forever and she eventually became a solitary wanderer around the world.  She also became a proponent of women's rights as they related to marriage and the law.

This was a fascinating collection of details about Theresa and her fight to be an individual of value in Victorian society. The author came across Theresa's story in a footnote while she was researching sensational novels.  In fact, one of the best parts of this book is the way that Schama related the history to the novels being produced at the time.  Though the mentions were brief, they provided a connection between this story and the ones I already am familiar with -- those of Dickens, Collins and more.  And Theresa's plight--that of being judged by a system that did not value independence or sensuality in women--made for a very thought-provoking read.  As I mentioned earlier, the only real weakness I found in the book was that it was mainly a presentation of facts with very little analysis.  We were presented with portions of letters and events and then left to determine on our own whether it was Theresa or Yelverton that was being truthful.  I would have liked an opinion from the author since she was the one who read all of the documents.  Despite this shortcoming, I enjoyed the book even though I didn't entirely like Theresa.

Appreciating the pioneers -- even the flawed ones,
K


Support our site and buy Wild Romance: A Victorian Story of a Marriage, a Trial, and a Self-Made Woman

on Amazon or find it at your local library. We received our copy through the LibraryThing Early Reviewer program.
Posted by Kristen M. at 12:09 AM