"Vish Puri, founder and managing director of Most Private Investigators Ltd., sat alone in a room in a guesthouse in ... South Delhi ..." 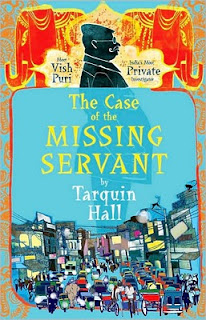 Since I first heard of Tarquin Hall's new mystery series set in India, I wanted to read it.  I needed to move away from English detective stories for a bit!  The first book, The Case of the Missing Servant, is culturally fascinating with a strong plot and larger than life characters and I can't wait for the second book to come out in June.

Vish (rhymes with "wish") Puri is a private detective in Delhi.  In fact, he is an award winning detective -- having won the Super Sleuth award in 1999 from the World Federation of Detectives.  His motto is "Confidentiality is our watchword".  He has a network of assistants who have imaginative nicknames like Facecream and Handbrake.  Vish himself is called "Chubby" -- an apt nickname for a man who just can't give up the tasty fried delights of his country.

A lawyer comes to Puri for his help in proving his innocence in the disappearance of a servant girl from his home.  Unfortunately, things move quickly around Ajay Kasliwal's case once a body is found that might have been the servant girl's.  Puri must find out what truly happened to Mary--a girl with only one known name and no known hometown--before Kasliwal is tried for a crime he swears he didn't commit.

This story is full of local details -- from the poor state of the public utilities to the growth of the call center and tech industries.  We also learn that the Indian justice system is in disarray when it is compared to Dickens' Chancery, as seen in Bleak House.  With a fourteen page glossary at the back of the book, Hall feels free to use local colloquialisms and the authentic Hindi for things like food and swearwords.  I thought that he did a fantastic job of transporting me to India and I felt he used situations unique to the country in the cases that he invented.  This story felt fresh and interesting and I hope the series continues on in the same way.

Practicing my Hindi swearwords for no particular reason,
K


Support our site and buy The Case of the Missing Servant

on Amazon or find it at your local library. We bought our own copy.
Posted by Kristen M. at 12:07 AM