Somehow, I ended up with a set of library books that are mostly youth novels about magic!  You've already read my gushing about Enchanted Glass earlier this week so I thought I would do a two-in-one post today to avoid totally turning my blog into a youth fantasy one! 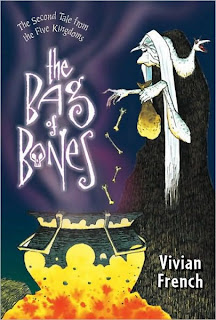 First, I read the second story in the Five Kingdoms series, The Bag of Bones by Vivian French.  (And yes, there are way too many numbers in that sentence!)  I read the first one, The Robe of Skulls, about a year and a half ago and had forgotten most everything about it.  However, within moments of starting the new book, I remembered what I liked about the first and I kept that good feeling right on through the second.

The first book focused on Gracie Gillypot and her escape from a less-than-ideal living situation with the help of some unusual characters.  In this one we follow Loobly Higgins

, an orphan who is in a different but also non-ideal living situation -- an orphanage run by a heartless man.  She is taken out for a day trip by a group of mostly-good witches who encounter a very evil witch.  The witch is determined to gain as much power as possible and, when she threatens the peace of the entire Five Kingdoms, Loobly and Gracie are the only ones who can stop her.

This book definitely seemed more cohesive than the first one.  However, part of the charm of the first was its tendency toward tangents.  This was a more average story set in an extraordinary world.  I've just seen that there is a third book already out and a fourth due in October (how quickly they pump out these childrens' books!) and I do plan on reading them at some point. 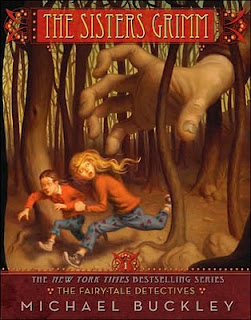 The other book I read this week was the first in the Sisters Grimm series, The Fairy Tale Detectives.  Written by Michael Buckley, this is one that I've had my eye on for a couple of years.  I would see them in the school library and wonder what the premise was.  If this first book is any indication, this has turned out to be just my type of low fantasy series!

Sabrina and Daphne Grimm are possibly orphans -- possibly because their parents went missing about a year and a half before and the police can't determine what happened to them and if they are still alive.  The sisters have been through a series of foster homes, each worse than the ones before.  When a "Grandma Grimm" claims guardianship of them, they are suspicious -- especially because their father always said his parents were dead.  So while seven year old Daphne is trying to embrace their new home and living grandmother, eleven year old Sabrina is trying to prove that the woman is an impostor and that the strange things happening around them in Ferryport Landing are her doing.  Fortunately, Relda Grimm is actually their grandmother.  But unfortunately, the giant that just kidnapped her is also real and it's up to the Sisters Grimm to rescue her.

I loved this story!  It was fun and imaginative and was a fascinating take on the fairy tale creatures of old.  Luckily there are already seven published books in the series.  I can't wait to get the next one!

Dreaming of youth and magic,
K


Support our site and buy The Bag of Bones: The Second Tale from the Five Kingdoms and

The Fairy Tale Detectives (The Sisters Grimm, Book 1) on Amazon or find them at your local library.  We borrowed both books from the library.