"Lewis Barnavelt fidgeted and wiped his sweaty palms on the seat of the bus that was roaring toward New Zebedee." 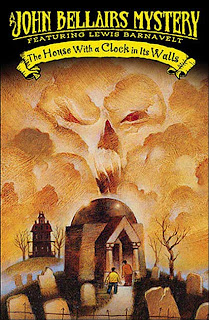 At the end of the recent Fuse #8 chapter book poll, Betsy listed some of the runners-up and one that caught my eye was The House With a Clock in Its Walls

by John Bellairs.  It received two #1 votes and had an awesome title so when I saw a cheap copy, I grabbed it.  This is the first in a series of stories that features young Lewis Barnavelt and was written in 1973.

Ten year old Lewis is a recent orphan who goes to the town of New Zebedee to live with his uncle John.  To Lewis' surprise, his uncle appears to be a magician, as does his neighbor and best friend, Mrs. Zimmermann. Lewis thinks it's all fun and games until he unwittingly lets lose a terrifying villain who threatens to destroy the world.

This was a really fun book though I'm not sure it's a favorite.  Lewis grew a lot during the book and I enjoyed his eccentric uncle and the crotchety Mrs. Zimmermann.  However, there is quite a bit of childhood bullying that goes on in the story which made me sad -- especially seeing the way it affected Lewis.  One of the main reasons I would choose to continue the series would be to see if Lewis manages to fight back at any point.  And, of course, I would love to see if he gains powers of his own.  I'll keep this one on the shelf in case Z wants to pick it up in a few years and if I see any others, I'll probably pick them up.

Have any of you heard of John Bellairs or read this series?