New Release: Seance for a Vampire 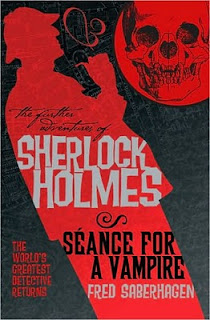 Titan Books has just re-released The Further Adventures of Sherlock Holmes: Seance for a Vampire by Fred Saberhagen and it's definitely a fun summer read.  Suppose Sherlock Holmes had a case that led into dangerous supernatural territory -- so dangerous that the only possible help could come from Sherlock's cousin, Prince Dracula.  I know ... it sounds a bit far-fetched but it really works!

A young woman disappears during a leisurely rowboat trip and turns up dead a day later.  When spiritualists arrive to take advantage of her mother and promise that they can contact Louisa, her father goes to London to ask Sherlock Holmes for help revealing the charlatans for what they are.  However, when Holmes and Watson attend the séance they must admit that something out of the norm is happening.  The young woman appears out of nowhere, looking pale and having no reflection, one of the spiritualists is brutally murdered and Holmes is dragged off by a powerful malevolent force.  So Watson must turn to the only one who can help -- Prince Dracula.

I had a lot of fun with this book!  It was the perfect read for a summer afternoon.  This is actually one of a series of Holmes books by different authors and I plan to read more of them.  Usually I'm touchy about retooling of characters but I think that Holmes has been taken in so many different directions over the years that I've come to accept it.  So why not see what his adventures would be like with Dr. Jekyll or martians?

A good read is elementary,
K


Support our site and buy The Further Adventures of Sherlock Holmes: Seance for a Vampire

on Amazon or find it at your local library.  We received a review copy from the publisher.