A Circus Journey for All Ages

Sometimes Z and I go to the library and all we can find are average picture books.  Other times, we find a select few that are anything but average.  Thankfully we've had some good luck this summer! 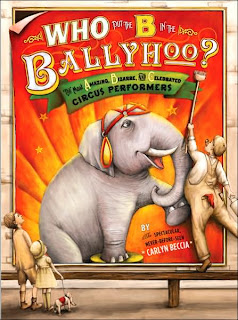 This bright and beautiful one is by "The Spectacular Never-Before-Seen" Carlyn Beccia and has the grand title Who Put the B in the Ballyhoo?: The Most Amazing, Bizarre and Celebrated Circus Performers.  This book is as informative as it is colorful.  It's a journey into the history of the circus and the "ballyhoo" -- the free show outside of the main tent that whets the appetite of the audiences and attracts them into the main tent.  This is an ABC book but definitely for

older children.  It's drawn like a series of posters that would have appeared at Victorian and turn-of-the-century circuses.  There are also facts about the acts and displays and the promotion of them on the bottom of each page.

This is a strangely coincidental companion to the book I am reading right now -- The Transformation of Bartholomew Fortuno -- which is set at P.T. Barnum's American Museum in 1865 (review later this week).  It's got the same cast of characters like a bearded lady, a strong man and a fat woman.  This book will either delight your child or frighten them so you may want to use your discretion before getting it.  It mentions the untimely demise of one performer which is a bit grim.  Some of the scary things are explained away though -- like the fact that most of the snakes used in the shows were not poisonous.  And, of course, many of the acts were quite politically incorrect so it would be a perfect chance to talk to your child about how we treat those who are different from ourselves.  This was a magnificent era that is thankfully only a curiosity now.

Celebrating the unique and bizarre,
K and Z


Support our site and buy Who Put the B in the Ballyhoo?

on Amazon or find it at your local library.  We borrowed a copy from the library.
Posted by Kristen M. at 12:55 AM