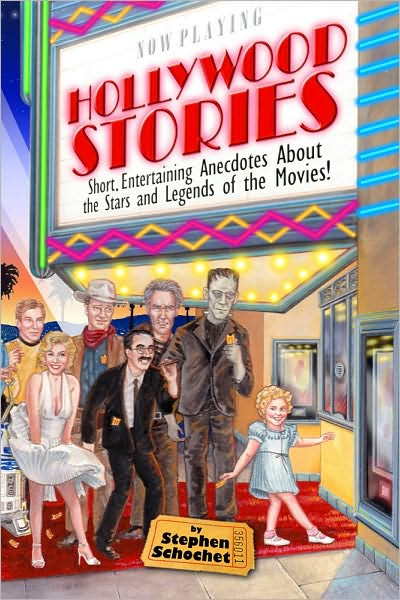 I'm sure you've gathered from my recent posts that I'm a pretty big fan of film, especially classic film.  I'm also a shameless television watcher so I was definitely looking forward to reading Stephen Schochet's Hollywood Stories: Short, Entertaining Anecdotes about the Stars and Legends of the Movies!

Schochet is a Hollywood tour guide and radio program host who has spent years gathering anecdotes about actors and the business.  This book has an incredibly large number of stories about a wide variety of actors, actresses and directors -- from George Lucas to Jim Carrey.

This is definitely a book for hardcore fans but there's also something for just about everyone who loves Hollywood.  As opposed to a lot of the news out of Tinsel Town, this isn't filled with sordid tales of drugs or affairs.  It's good, wholesome fun!  The only small complaint I have is that it skews toward the older days of film and television and doesn't have many modern stories.  There's a wealth of information about everyone from Laurel and Hardy to Arnold Schwarzenegger but young readers might not recognize many of the names in the book unless they are media junkies.  But, even skipping the entries that I wasn't really interested in, there was plenty to interest me.  This would be a great gift for a film buff or gossip hound.

In the know, you know,
K


Support our site and buy Hollywood Stories: Short, Entertaining Anecdotes about the Stars and Legends of the Movies!

on Amazon or find it at your local library.  We received a copy for review from the author.
Posted by Kristen M. at 12:13 AM