"The city that Sunday morning was quiet." 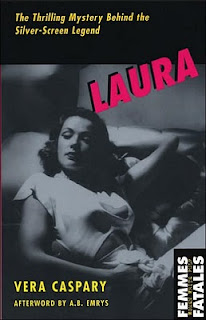 Well, here we are at one of the stories that instigated my Classic Films Challenge -- where I read the written word behind my favorite films, be they novels, short stories or plays.  Laura

, directed by Otto Preminger, in 1944.  I've seen this film so many times that I can't even give you an estimate.  It features a young Vincent Price (surprisingly as the young, handsome suitor), Dana Andrews and Clifton Webb.  It was also my first introduction to Gene Tierney, who plays the beautiful Laura.

The best part of this story is the huge plot twist so I certainly don't want to give anything away.  All I will say is that Detective Mark McPherson is investigating the murder of Laura Hunt in her New York City apartment.  His work is thwarted by the reticence and dishonesty of her fiancé, Shelby Carpenter, and muddied by the interference of her mentor, Waldo Lydecker.  And to his surprise, Mark has begun to fall in love with the dead woman.

The book and the film have all of the same plot elements and twists.  It's just the details that differ a bit.  The book exhibits much of the racism and sexism that seems to be prevalent in almost all of the pulp novels I've read.  It's also told from multiple points of view.  Most were easy to read but the opening chapters, those written by Waldo Lydecker, almost made me quit the book!  It was incredibly pompous and wordy (just like Lydecker himself).

If you haven't seen the film yet, I highly recommend it.  It's possibly the best 1940s noir film that was made.  The book, on the other hand, would be a good read for those who appreciate pulp fiction but I don't think it's for everyone.


Sure to be adored even after I'm gone,
K


Support our site and buy Laura

(the novel) and Laura

(the film) on Amazon or find them at your local library.  We own a copy of the film and borrowed the book from the library.
Posted by Kristen M. at 12:14 AM