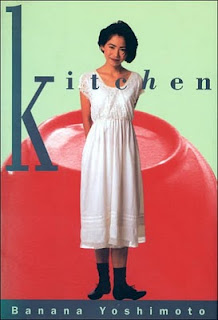 The current read for the Japanese Book Group, hosted by Tanabata of In Spring It Is The Dawn, was a choice of Kitchen and/or Goodbye Tsugumi

by Banana Yoshimoto (real name Mahoko Yoshimoto).  I chose Kitchen which is actually a book with two stories of loss -- one called Kitchen and one called Moonlight Shadow.

The first is about Mikage Sakurai, a university student who has just lost her last family member -- her grandmother.  A young man who attends the funeral, Yuichi Tanabe, invites Mikage to stay with him at his mother's home until she is ready to be on her own again.  When Yuichi also loses his only family, they need to decide if they have a relationship because of loneliness or love.

The second story, actually written first in 1986, is about another young woman named Satsuki.  Her boyfriend of four years has just died in a car accident while driving his younger brother's girlfriend home.  Satsuki and Hiiragi are both trying to come to terms with such a large loss so early in life.  But a mysterious visitor may help them gain some sense of closure.

These were both very tragic but real stories of life.  I liked the stories for the most part, especially the slightly supernatural element of Moonlight Shadow, but sadly not the translation of Kitchen.  I thought it was awkward in places and sometimes read more like a literal translation than a literary one.  There is an interesting interview with Michael Emmerich who took over translating Yoshimoto's books after this first one.  It seems that he was less than satisfied with Megan Backus' translation as well.  Another issue I had was that the kitchen metaphor didn't seem very strong even though it was the backbone of the first story.  This was a shortcoming on the part of the author though.

Because this was Yoshimoto's first published work, I am interested to see how her style and subject matter change over the years.  I will definitely read more of her works.  Again, I want to thank Tanabata for encouraging me to read more Japanese novels with her challenges!

Exploring the depths of grief,
K


Support our site and buy Kitchen

on Amazon or find it at your local library.  We borrowed a copy from the library.