Nothing's Changed, Oh I Still Love You ... The Smiths

I actually remember the first time I heard The Smiths.  I was in junior high and my best friend Heather was making me tapes (yes, this was back in the era of cassette tapes) of music that her older sisters had played for her.  One of the tapes she made me was some forgettable band on one side and then The Queen Is Dead by The Smiths (1986) on the other side.  That album was like nothing I had ever heard before.  Frankly, Mr. Shankly and Cemetry Gates were light and perky melodies with dark lyrics.  I Know It's Over was full of the sort of angst and fatalism that I didn't know yet at 13.  There Is a Light That Never Goes Out was a beautiful blend of love and death and it blew my socks off.  And then, a few months later (if even that), I found out that The Smiths had just broken up (1987).  I was bummed but I was a kid.  It didn't mean that much to me and I started listening to random pop and rock crap which continued through high school.  Then, the summer after high school, I met a boy.  And that's where most stories start, isn't it?  This boy was a big fan of The Smiths and Morrissey and, soon after, so was I.  I was working at a music store at the time and started acquiring albums (cds by this time) and within a few short months was a full-blown fan.  I've now seen Morrissey (lead singer of the band) in concert three times and I still listen to The Smiths regularly.  (Things didn't work out so well with the boy.) 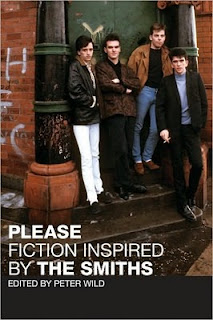 About a month ago, I was looking for an author on my library website and this book popped up -- Please: Fiction Inspired by The Smiths

, edited by Peter Wild (called Paint a Vulgar Picture in the U.K.).  Strangely, it doesn't even feature the author that I was looking for so I'm not exactly sure why it came up.  But I couldn't resist checking it out and I've just finished what turned out to be an interesting mix of stories.  Some were awesome, others were, well, not.

There are 24 stories in the volume, each with a Smiths song as the title. However, I found it hard to find a connection with most of the stories and their namesakes -- either thematically or emotionally.  It wasn't until the seventh story and its Scottish brogue and suicidal story that I got the feeling that the author actually listened to and "got" The Smiths.  And then the real joy for me came with the tenth story, Oscillate Wildly, based on song with no lyrics.  This one was what I thought they all should have been -- bleak and moody but also funny!  After all, it featured the stone genitals taken from the angel at Oscar Wilde's grave.

A few more of the stories were close but a bit too serious.  One of the best things about The Smiths and Morrissey is the hidden humor in many of the lyrics.  Morrissey is a man with a great sense of humor.  After all, he's the type who pulled a banana out of the front of his trousers during a concert!  That's why Matt Beaumont's story I Want the One I Can't Have was one of the best of the volume.  It's an author's lament at having received an assignment to write for the "inspired by Duran Duran" anthology instead of The Smiths' one.  It was hilarious.  And Peter Wild's satirical political story was also funny in a dark way and just the sort of thing I can imagine Morrissey laughing at.  And then I hit Cemetry Gates.  This was an amazing story about two people who have fallen in love while both terminally ill.  I loved it.

So, the few gems in the book were worth picking up this book for.  And I have a feeling that this is the sort of book that each reader, Smiths fan or not, will appreciate in a different way.

"There's more to life than books, you know, but not much more." -- Handsome Devil, Morrissey


Support our site and buy Please: Fiction Inspired by The Smiths

on Amazon or find it at your local library.  We borrowed our copy from the library.
Posted by Kristen M. at 12:17 AM