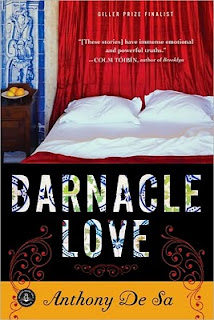 I forget where I first heard about Barnacle Love

, Anthony De Sa's Giller Prize nominated debut novel, but it sounded intriguing.  This story of a young Portuguese man who goes looking for a new life in Canada is not a fast-paced novel but it reveals the depths of what it means to be an immigrant in a painful and heartbreaking way.

The story begins by following a twenty-ish Manuel Rebelo as he leaves his fishing community on an island in the Azores.  He sets out on a voyage which eventually ends up in Canada.  Soon after they leave on the return journey, he is lost at sea and, just as he is close to death, is rescued by a Canadian fisherman.  Since he is presumed dead in his home country, he takes the opportunity to follow his vague but real dreams and to begin a new life in an adopted country.  We follow Manuel's story for a bit and then the narrative changes focus to tell the story of Manuel's son, Antonio, who is born in Toronto and lives in a Portuguese immigrant area with his mother, father and sister.  As Manuel becomes increasingly despondent at not achieving his undefinable dream, Antonio must define his own identity.

Told with stark and simple language, the story is still quite complex.  From Antonio's criticism of his father's lingering accent to Manuel's over-exuberant Canadian patriotism, we view many different sides of the immigrant story.  This wasn't an easy story to read but it seems like an essential one for understanding something that many of us will never experience first-hand.

Three generations away from my own immigrant story,
K

on Amazon or find it at your local library.  We received a copy for review from the publisher.
Posted by Kristen M. at 12:15 AM